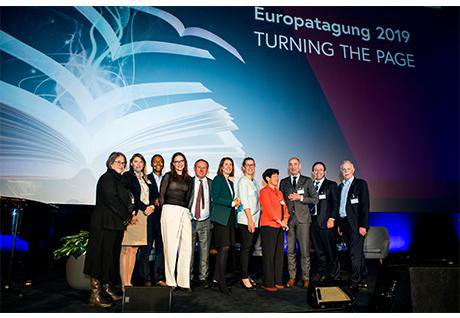 The annual Austrian "Europatagung“ took place in Vienna on 5 November 2019. This year’s motto was “Turning the page“, looking at upcoming new developments in RTI policy both at European and at national level, and how to ensure Austria’s future success in RTI against this background. The conference also honoured the work of the members of the ERA Council who had acted as the advisory body for the Minister of Education, Science and Research on EU RTI and ERA matters for the last six years and co-hosted the event. As the mandate of the ERA Council is expiring at the end of 2019, this was the last of this series of conferences. The Austrian RTI advisory system will be re-designed in the course of the preparation of the national RTI Strategy 2030.

In her address, Austrian Federal Minister of Education, Science and Research Iris Rauskala highlighted Austria’s success in the current Framework Programme Horizon 2020, with more than € 200 million of funding being awarded to Austrian research institutions and enterprises per year. Austria’s SMEs even have the highest success rate of all EU countries in Horizon 2020. Thus Austria is well under way towards reaching or even exceeding the target of receiving € 1.5 billion of funds from the current Framework Programme – the current forecast is at € 1.85 billion. Regarding the success rate of proposals, Austria is second only to Belgium, at 17.7 percent. Austria is contributing 2.36% of the budget to Horizon 2020, and is receiving a funding share of 2.8%. As regards the budget for the next Framework Programme Horizon Europe, currently being negotiated in the context of negotiations on the next Multiannual Financial Framework (2021-2027), Minister Rauskala therefore stressed that Austria - being a net contributor to the EU budget and benefiting strongly from the research programmes - would fight for sufficient funds for research in this context, while respecting the overall objective of a 1% ceiling for the EU-budget.

Jean Eric Paquet, Director-General for Research and Innovation at the European Commission, appreciated Austria’s success. Nonetheless he reminded the conference participants that yesterday’s success is no guarantee for success in Horizon Europe, and that Austria will have to position itself even better if the country wants to become an Innovation Leader, and to benefit adequately from the ERC (European Research Council), the EIC (European Innovation Council), and the Missions, Partnerships and all clusters in the new Framework Programme Horizon Europe. The programme will be very different from Horizon 2020, with co-creation and co-design as its hallmarks. Its five Missions in the fields of cancer, climate change, healthy oceans, climate-neutral cities, and soil health and food, will cover both basic research as well as concrete implementation measures in the respective fields and will require inter-sectoral cooperation.

ERA Council Chair Helga Nowotny also acknowledged Austria’s success in the European research programmes. For the future, she stated that she hoped for further active and successful participation of Austrian researchers at European level, in order to find solutions to the grand societal challenges.