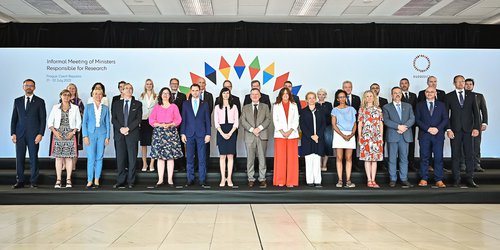 Over lunch, delegations were invited to an informal exchange of views on the reactions to the ongoing military aggression of the Russian Federation in Ukraine, and to discuss pertinent measures taken at European and Member State levels in research and innovation. The debate focused on the reconstruction of research and innovation in Ukraine, support to researchers and innovators who remain in Ukraine, as well as science diplomacy and support to Russian individual researchers. The European Commission also gave an update on the measures at European level, where sanctions have been swiftly imposed on Russia and immediate and effective support has been provided to Ukraine and Ukrainian researchers and scientists. In terms of immediate support, three key initiatives have been implemented in the field of research and innovation: The European Research Area for Ukraine/ERA4Ukraine (ERA4Ukraine | EURAXESS (europa.eu)), the Horizon4Ukraine initiative (Horizon4Ukraine - IT How To - Funding Tenders Opportunities (europa.eu)) and the ERC4Ukraine initiative (ERC for Ukraine: jobs for researchers fleeing the war | ERC: European Research Council (europa.eu)).

The EU Competitiveness Council under the Czech Council Presidency will take place on 2 December 2022 in Brussels.